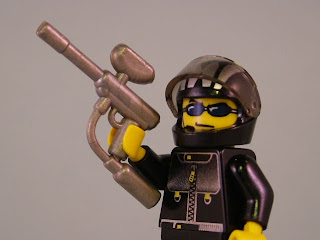 Another problem of the recent holiday is my recent resurgence in interest in what I refer to as "The Other Woman" in my hobbies, Paintballing.  I haven't been much in the last year, mostly because of my renewed passion for the miniatures hobby.   I've come to the conclusion that I was burning myself out a bit on the 40k front, and that I didn't need to play every weekend and that some kind of a break would be beneficial.   I've also like to cut out the tournaments I've been playing in, as I did 6 in the last 5 months, and that includes not playing any in the month of November.  More then one a month I think may be a bit excessive.

My son has also reached an age where sharing paint balling with him is becoming a real possibility as well.  While I understand the allure of plastic men battling he is still a bit young to understand the appeal, though shooting each other with paint balls is one he understands all too well.  It is tough as a father to pass on an activity that he can do with his son, as you feel the teenage years coming soon and the marginalization that accompanies it approaching.

This weekend I had planed on attending a local 1850 but I may pass and take my son to a local field, as the weather has been unseasonably dry and its hard not to take advantage of it.
Posted by Unknown at 10:28 AM 0 comments

As my below lack of posts shows, I didn't quite hit my holiday painting goals.   I was very on track in the beginning, but the allure of all the time off and relaxing was too much of a sirens call.  I did get the last coat of highlighting done on the ground vehicles and I got one of the two Valkyries inked (looks great).  The infantry haven't been touched and the vehicle tracks are still not installed.  I blame Black Ops, my recent family developments (got engaged over the holiday) and way too much good food and couch time.