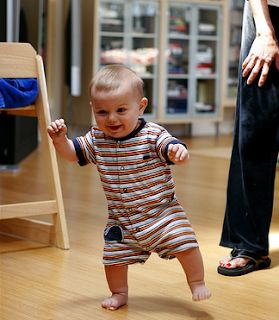 I accidentally left my mouse at work last night so a night I had planned on spending on Battlefield 3 servers was instead spent painting.  I was frustrated at first though it ended up being a blessing in disguise.  While you can't see much progress on the models I got a solid 2 or 3 hours of painting in while my wife was out being social.

I was able to get a basecoat down on all of the purity seals (these guys have at least 3 or 4 per model) as well as any other cloth/paper items.  I also finished the gold wash as well as touch up a few I missed.  The storm bolters and metal bits got their washes as well. I also basecoated all of the power weapons with some mordian blue.  I haven't decided exactly how I am going to paint the power weapons, though I know I want it to be some kind of blue...

The next step is to finish the purity seals and start picking details.  Then I might start the power weapons.  We'll see. 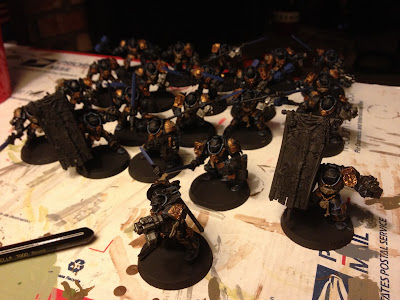 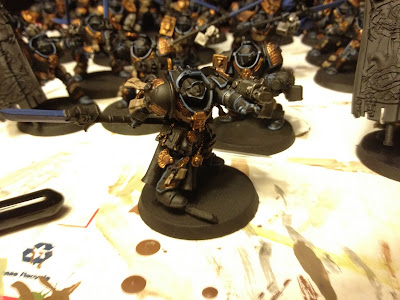 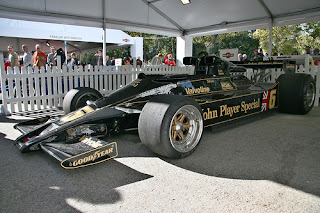 I picked up a project that had laid dormant for months yesterday.  Over the summer I had started the Independent Characters Hobby Challenge with a Grey Knight Army though I had stalled out somewhere around month 2.  I missed the deadline for the second month because I got married and it just took too much time, so by the time I had the time I had lost interest as well as just didn't think I could catch up.  My eyes were bigger then my stomach on trying to take on a new army in the time leading up to getting married.   I had some free time on my hands yesterday and decided I wanted to do something other than work on the Land Raiders I've been chipping away at for the last few weeks.

I pulled out the models and finished the Gold details and got a coat of Devlin Mud on the gold.  My next step is to get the metal washed and then begin another line highlighting step.  I also started in on the bases, giving the resin a good coat of gray primer.

This picture is before washing the Gold.  I'll post some pictures later of the washed Gold. 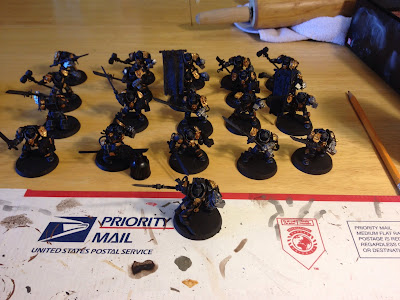 I think I have a dice problem?

While cleaning my garage today I put all my dice sets into a box and I think I might have a problem.... 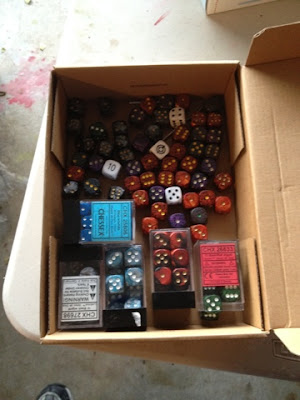 I made some progress on my Land Raiders that I had started a few weeks ago. Not quite done with the old style though I started my other one to get them at least table top ready so I didn't have to use primed stuff in gsmes. 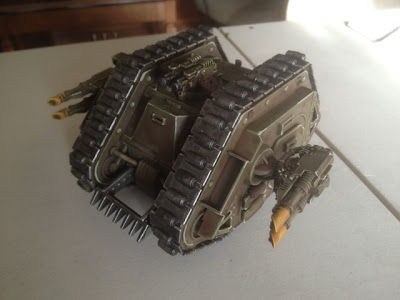 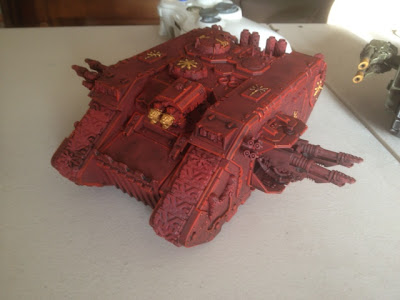 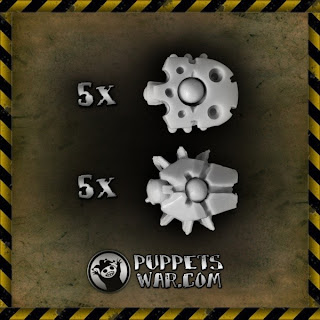 Puppetswar has some fantastic resin "Cybernetic Beetles" for Sale.  So far I have suppressed my normal urge to start every new army the day it hits shelves, and one of the things that has helped is the most interesting build, the scarab build, is kind of tough to do.

Thanks to Puppetwar.com there is now a pretty easy (and cheap, 5 euros for 5) solution to the problem of no scarabs. I've seen some guides on from the warp on how to make a scarab mold though even the author admits its not easy to do.

One day GW will realize how much money they can make if they actually sell the models in the codex.  Until then, I hope more places like Puppetwar give the market what it's asking for.
Posted by Unknown at 4:41 PM 0 comments 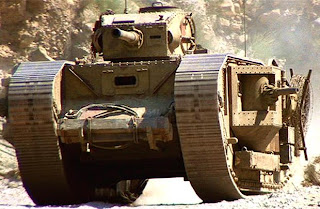 I've had a Mark I Land Raider sitting on my shelves for about ten years.I picked it up from a guy in a game store I used to hang out at who wanted a new one and was complaining his Mark I looked terrible compared to the new (at the time) current Land Raider model.  Most folks have forgotten, but the Mark I had been out of print for ten years, ten years ago, so I jumped on the chance to get an old model of such legendary status as the Land Raider was at the time.  I offered to buy him a new one, and I was able to add a Mark I to my collection.  I've always liked to use old Marine models in my Chaos armies, as it leads to a sense of authenticity.

Last weekend, I decided that my Mark I had seen better days.  It was dusty, terrible paint job, and either needed to be sold or given a new lease on life with some new paint.  I decided to try painting it in the style of my new nurgle marines with some edge highlighting.  I think it came out pretty well.  I'm not 100% done, I still need to highlight the edge highlighting, though I thought I would post some pics showing how good a twenty year old model can look with modern painting techniques.

I gave the model a good brown basecoat with Army Painter primer. 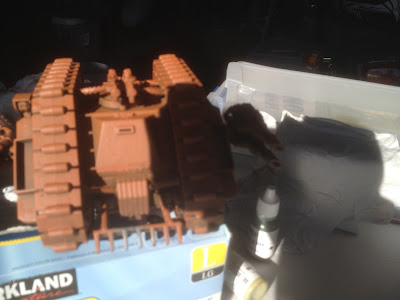 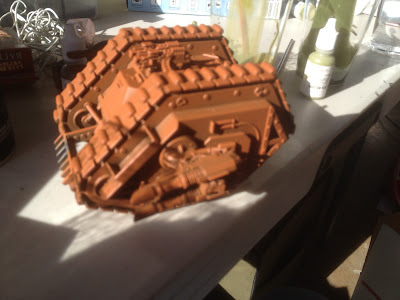 I then gave it an airbrush coat of a reaper green. 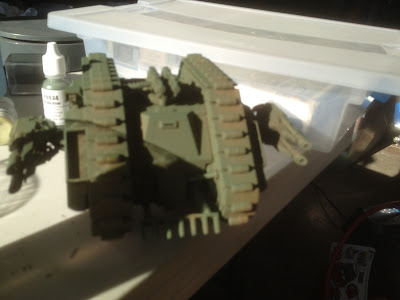 I then gave it two highlights of the next two lighter shades of Reaper greens. 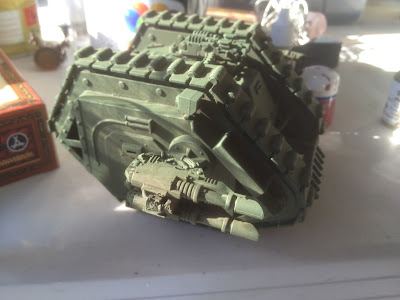 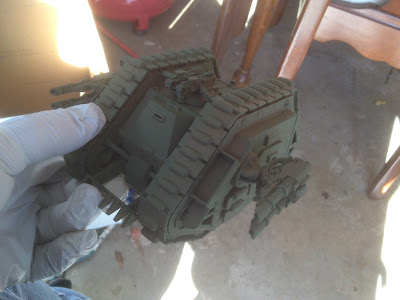 I gave the model a Devlin Mud Wash and then spent some time Edge Highlight the tank itself with the first airbrush highlight color. I also painted the treads boltgun metal and gave them a badab black wash. 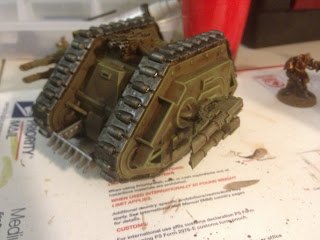 I then highlighted the Tank Treads 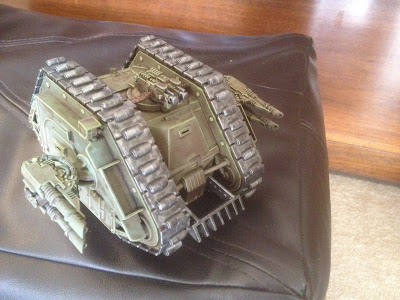 A few more details and I am almost done.   The only real remaining details is cables on the weapons and the final edge highlights. 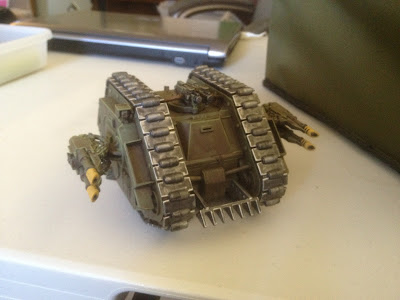 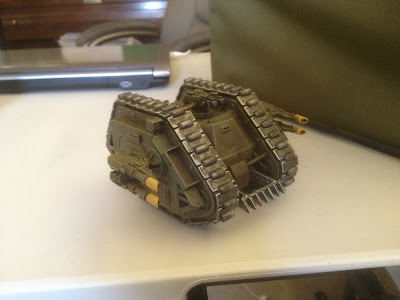 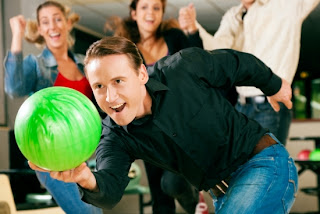 This weekend I played in my second East Bay Wargamers League game. I didn't get any pictures from my first game, though I did take some from this game.  The game was a brutal slugfest as my opponent had some really effective hammer units that bashed the hell out of my Chaos Army. I also learned a lot about the Black Templars codex, as it was only my second game in the 18 months I've been played fifth edition that I faced them.

I took a Nurgle list that had a splash of Khorne for some additional assault punch.  Not only was I looking for a little more oomph in the third phase then my list has had lately, I've been breathing some new life into models I painted years ago with a bit of touch up. I re based a unit of Khorne bezerkers and my Kharne model on Friday night, tossed some Devlin Mud and they look about ten times better.  So much improved that I spent some time after my game and Sunday adding even more details.

The game was Capture and Control with Dawn of War. My opponent won first turn and deployment. 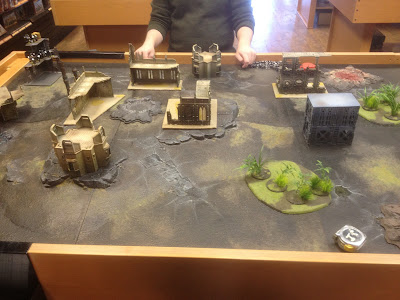 He placed his objective in the upper left building, so I had placed mine rather close with the idea that we would smash into each other around both and hopefully I'd be left standing.

I got lucky and seized, so my Rhino with a squad of plaguemarines rushed forward to grab my objective.  The red land raider had my bezerkers and the green one held my plague marines. 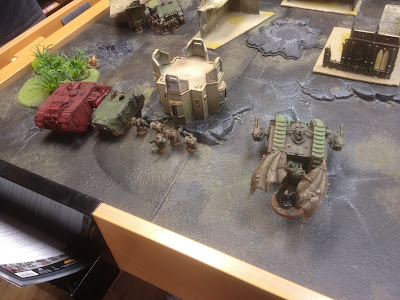 My opponents army comes in. 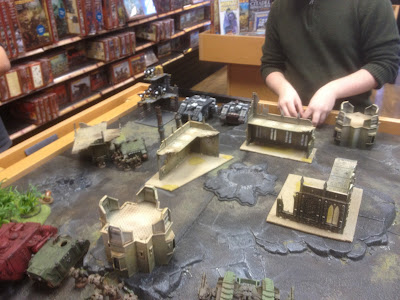 He popped the Rhino. 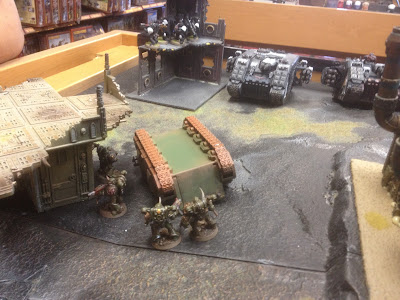 I was able to get two meltaguns in range and blew up one of the two, the one that was holding the lightening claw terminators. 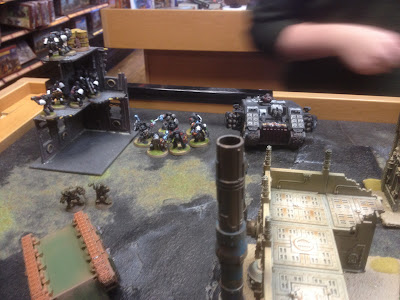 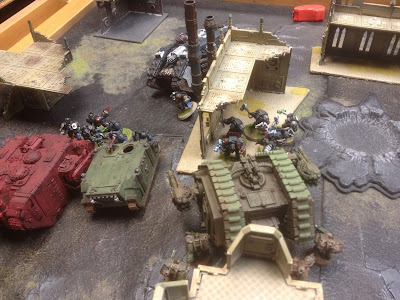 I was able to charge in at this point.  I decided to concentrate on the TH/SS terminators as at the time I thought they were the bigger threat. I ended up getting really lucky and he failed a lot of saves. 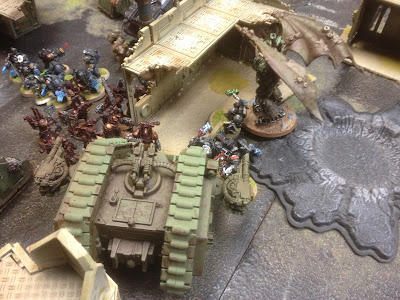 Next turn he was able to get the Lightening Claw terminators into the combat and destroyed everything.  The combat result was enough to finish off my fearless Demon Prince and Chaos Lord. 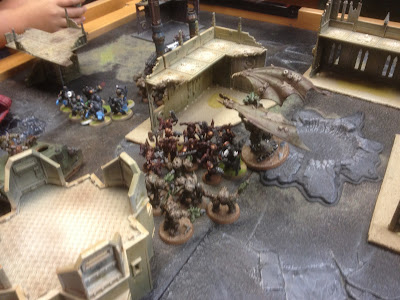 At this point, the game turned into a chess game. I had moved a squad of plague marines onto the objective he held, along with my raptors squad.  I was able, with the help of two powerfists, finish off both five man squads.   He did deep strike in the Dreadnought, but it wasn't able to get close enough to the objective before the end of the game. 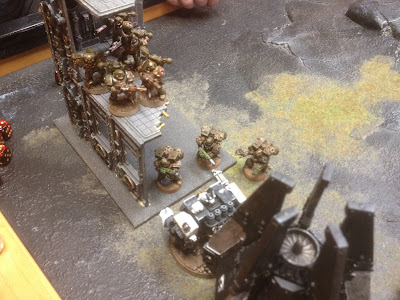 It was a game that had a lot of swings back and forth.  In the end, while I rolled terribly for most of the big melee in the middle of the board, I got lucky as his remaining nasty units were just too far to get into it with my remaining scoring unit.   If it was Victory or Kill points I would have been owned.  All I had left at the end of the game was 5 plaguemarines and 3 raptors, but it was enough to hold an objective so I pulled out a victory.